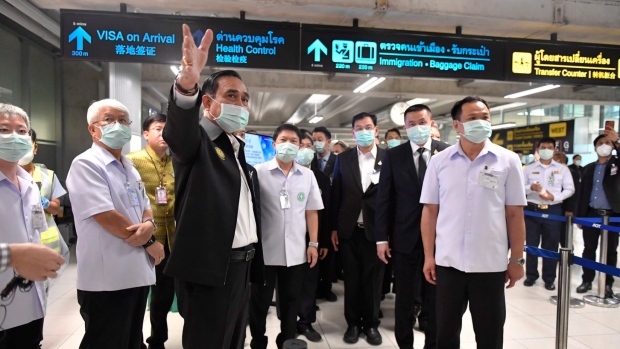 WASHINGTON — Chinese authorities are struggling to strike a delicate balance between containing a viral outbreak and restarting the world’s second-biggest economy after weeks of paralysis.

As the death toll from the newly named COVID-19 illness topped 1,000, global supply chains remain widely disrupted for businesses across the world that have built deep connections to China.

Mail service has been delayed after airlines suspended flights between China and the rest of the world. U.S. chip maker Intel and Chinese smartphone maker Vivo joined other tech giants in withdrawing from a major European technology fair over virus concerns.

Prices for oil, copper and other basic building-block commodities have tumbled on dwindling demand from China, often called the world’s factory. China alone accounted for half the growth in the world’s oil demand last year, according to IHS Markit. It buys more than 40% of the world’s iron ore, coal, nickel, aluminum, copper and finished steel, UBS says.

Shuttered factories and travel restrictions in China have contributed to a 20% drop in oil prices since Jan. 7, when Chinese authorities identified the new virus. Prices for copper, soybeans and even lean hogs have all fallen more than 6% over the same time.

Much of China remains on lockdown. Even factories that are open must contend with logistical bottlenecks and labour shortages as travel restrictions prevent employees from returning to work after the Lunar New Year. That’s all worrisome news for multinational companies that have grown to depend on China for everything from auto parts to toys.

“This is the worst supply chain problem I’ve seen in 40 years,” said Isaac Larian, CEO and founder of toymaker MGA Entertainment, which produces the popular LOL dolls. “There is no contingency plan.”

Retailers are increasingly concerned that shipments will not arrive in time for Easter and Mother’s Day, which would force them to mark down the price of merchandise that missed its sell-by date.

Executives at athletic gear maker Under Armour warned that the outbreak is delaying shipments of fabric, packaging and other raw materials from China and will reduce first-quarter revenue by up to $60 million.

The consequences are severe in part because so many companies depend on “just-in-time” deliveries to limit the cost of stockpiling supplies. David Closs, an auto industry expert at Michigan State University, noted that many auto parts coming out of China — especially electronics — are flown to the United States. And American plants don’t have inventory on hand.

“It’s much cheaper to air freight them than it is to have two months of inventory sitting in a container (on a cargo ship) on the water, so there’s not much in the pipeline,” Closs said. “Once they shut the factories (in China) down, the U.S. industry starts feeling it pretty quickly.”

Still, some shut-down companies with operations in China are showing tentative signs that they are beginning to stir back to life.

Toyota spokesman Eric Booth said the company’s plants there are preparing to resume operations as early as next week. And General Motors said its joint-venture partners in China plan to restart production Feb. 15.

Beijing is trying to limit the economic damage from the coronavirus, which is expected to savage economic growth in the January-March quarter and leave 2020 growth well below the 6% — already the lowest figure since 1990 — that economists had expected.

Chinese authorities face “a difficult balancing act between containing the virus and resuming business,” Kaho Yu, a senior Asia analyst at the consulting firm Verisk Maplecroft, said in a research report. “The return of workers to crowded environments, such as mines and factories, could push the outbreak to another peak, resulting in rising discontent and political pressure for failing to control the crisis.”

China’s economy, hobbled by a 19-month trade war with the United States and a deliberate government campaign to rein in runaway debts, was decelerating well before the viral outbreak.

The health crisis is giving multinational companies another reason to rethink their dependence on China, which has been at the centre of repeated outbreaks — bird flu in 1997, SARS in 2003 and now the coronavirus.

Koray K├╢se, senior director of supply chain research at the Gartner consultancy, said companies need to better assess the risks involved in manufacturing in China and other developing countries.

“It’s a wake-up call,” he said. “Companies will have to think about their manufacturing footprint and their appetite for risk.”

Those companies already had reason to consider moving some production out of China. Costs there are rising. And robotics and other technologies are reducing labour costs and making it more feasible to manufacture in high-wage locations such as the United States and Europe.

Many analysts expect trade tensions between the United States and China — now marked by U.S. tariffs on $360 billion in Chinese imports — to continue even after the protectionist President Donald Trump has left office. Companies have reason to diversify out of China to limit the impact of U.S. tariffs.

But leaving China can be arduous and complicated. Over the past three decades, global companies have come to rely on Chinese manufacturing centres, where specialized suppliers cluster and make it convenient for factories to obtain parts when they need them. China accounts for more than 80% of smartphone and notebook production, 55% of global exports of handsets and computers and more than half of global TV and server production, according to estimates by UBS.

“It’s all part of a big puzzle,” said Barbara Hoopes, associate professor of business information technology at Virginia Tech. “It’s more complex than most consumers realize. You get 87 types of toothpaste on the shelf, and you don’t think of what it takes to get them there.”

Without China, she said, it is “hard to imagine how anything would get done.”

Mike Wall, an auto industry analyst for the research firm IHS Markit, was encouraged that some companies are preparing to restart production.

“It will take time to build back up,” Wall said. “As we see these plants come back on … that will help, but we’re not out of the woods.”

D’Innocenzio reported from New York and Koenig from Dallas. AP business writers Stan Choe in New York and Joe McDonald in Beijing contributed to this story.

TORONTO — Canadian Tire Corp. Ltd. is promoting Gregory Craig to the job of chief financial officer, replacing Dean McCann, who is retiring. Craig is president of Canadian Tire Financial Services and president and chief executive of Canadian Tire Bank. He takes over the new job on March 2. McCann will continue as a director […]

HALIFAX — Empty shelves have been spotted at several Halifax retailers — a sign of what can happen, when the country’s rail lines grind to a halt. With product unable to reach the Maritimes by train, retailers are doing what they can, to get shoppers what they need. “You will see stores where there will […]

NEW DELHI, INDIA — India said Monday it plans to sell its entire 100 per cent stake in the national carrier Air India to shore up falling government revenues amid an economic slowdown, after an initial attempt last year failed to attract a single bidder. The government issued a document on Monday inviting initial expressions […]