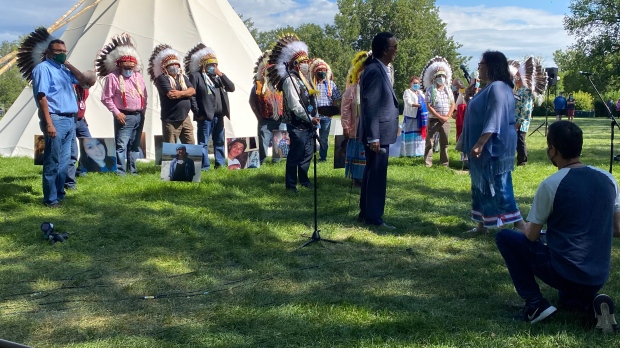 REGINA — The government of Saskatchewan will have to wait until Sept. 4 to request a court order for the removal of a man’s tipi from the legislature’s lawn.

Provincial lawyers filed an application to the Court of Queen’s Bench seeking a court order to have Tristen Durocher’s camp forced out of Wascana Park.

The 24-year-old Indigenous man walked more than 600 kilometres to Regina from a community in northern Saskatchewan to call for legislative action to address high suicide rates in the region.

Durocher’s lawyer has until Aug. 20 to present a Notice of Constitutional Question.

Durocher, who is on a tea fast until mid-September, says grieving families have been coming to the site.

Court documents filed by the province say the man doesn’t have a permit and that overnight camping and fires are prohibited in the park.

The documents say Durocher has been made aware of the rules and Regina police won’t enforce them without a court order.

With files from the Canadain Press.

Holly McKenzie-Sutter, The Canadian Press Published Monday, July 8, 2019 4:17AM EDT TRINITY, N.L. — Once a bustling family attraction and the site of a rare piece of North American railway history, visiting the Trinity Train Loop in eastern Newfoundland now feels like walking into a post-apocalyptic movie scene. Train cars with smashed windows are […]

When Dexter Brown began working at the CBC four years ago, it felt like home. “I felt like I was giving back to Canada because it is Canada’s public broadcaster,” he said in an interview. “It holds a special place in my heart.” Brown lives near the CBC’s downtown Toronto headquarters and still walks by […]

THUNDER BAY, ONT. — Ontario’s First Nation chiefs are calling on the provincial government to reflect on its relationship with Indigenous people on 25th anniversary of the Ipperwash crisis. Chiefs of Ontario head Alvin Fiddler said in a statement over the weekend that distrust between First Nations and authorities continues to exist as a result […]